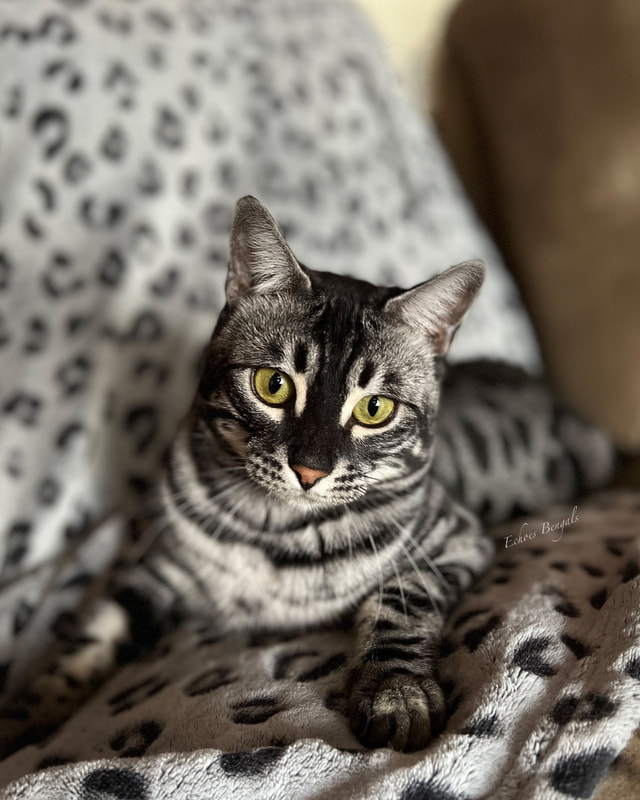 Sire:  TGC Amazonbengals Cruise of Lunakatz
Dam:  Heavnsntbengals Leia of Lunakatz
Winchester is a silver charcoal Bengal.  He has a soft and silky coat that lays tight against his body.  His eyes are the most brilliant golden color.  He has stunning contrast and a nocturnal wild expression.

​His temperament is wonderful.  He gets along well with our other stud cat. They are the best of friends and never fight. They share a cat wheel and the unlikely duo can be seen walking on it together in sync. 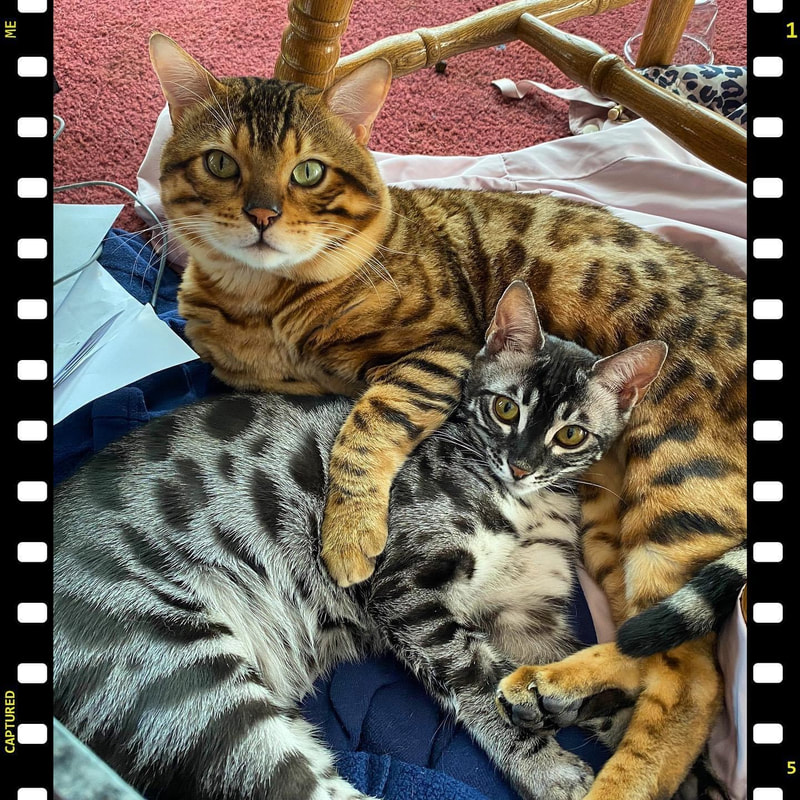 In Photo Above: Winchester and Clover
Please, don’t mind the mess… the boys had just knocked everything off of the table. These guys get into all sorts of mischief together! It was an in the moment sort of picture. “Winnie” has grown some since this photo was taken. 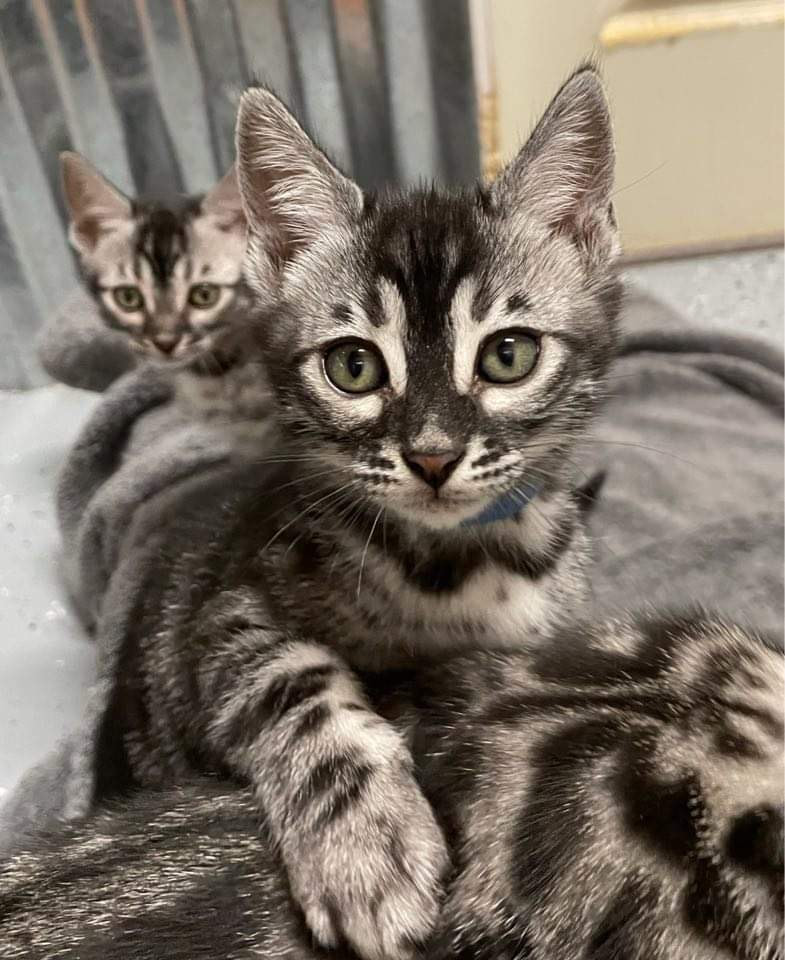 In Above Photo:  Winchester with a couple of his littermates at Lunakatz Bengals
Traveling to Pick Up Winchester

My son and I had quite the adventure driving down to Oklahoma to pick up Winnie from Lunakatz Bengals.  We decided we would drive in style in a black 1996 Chevy Corvette… make a real road trip of it.  It did not disappoint.

Some of the good parts…
​
There are a lot of Corvettes in Kansas City… so many Corvettes and other fancy cars. Corvette people usually always wave and we wave back. It’s a fun car to  drive!
​​At some point in Kansas, we saw this really strange sign that said, “Bazaar Cattle Crossing” and just had to sit in the car for a couple hours puzzled about what the heck we just saw until we got better reception to Google it. It is what it says… “Scenic”… and “Cattle Crossing”…. That’s oversimplifying it but, you can always Google it.
We knew we’d arrive at our hotel late, so I had already called and they said it would be fine. We got to the hotel and there was NO ONE! In the lobby there was one person asleep at a table… snoring. There was a note at the desk that says someone will be back. So, we waited… and waited… and waited… Finally, someone walked by and wanted to know what we needed.  “Apparently we needed “Mr. Sleepy” after all.
Throughout the entire trip we only encountered one interesting animal in a state we’d never been to before. We saw a dead scorpion in it’s wild habitat. Rather disappointing. It has been stepped on… most likely stomped on.
Winchester was a dream pretty much the entire drive. He cried a little at first. Then, he either stayed on my lap or cuddled up under my arm. Occasionally, he would get up and just look out the window. Drive-through windows were fun! It felt a little like we were traveling with a celebrity.

It is much prettier on the drive back, especially when it’s not dark.  So much open space! It was a breathtakingly beautiful drive! Almost surreal.  I wish I had more photos to share. 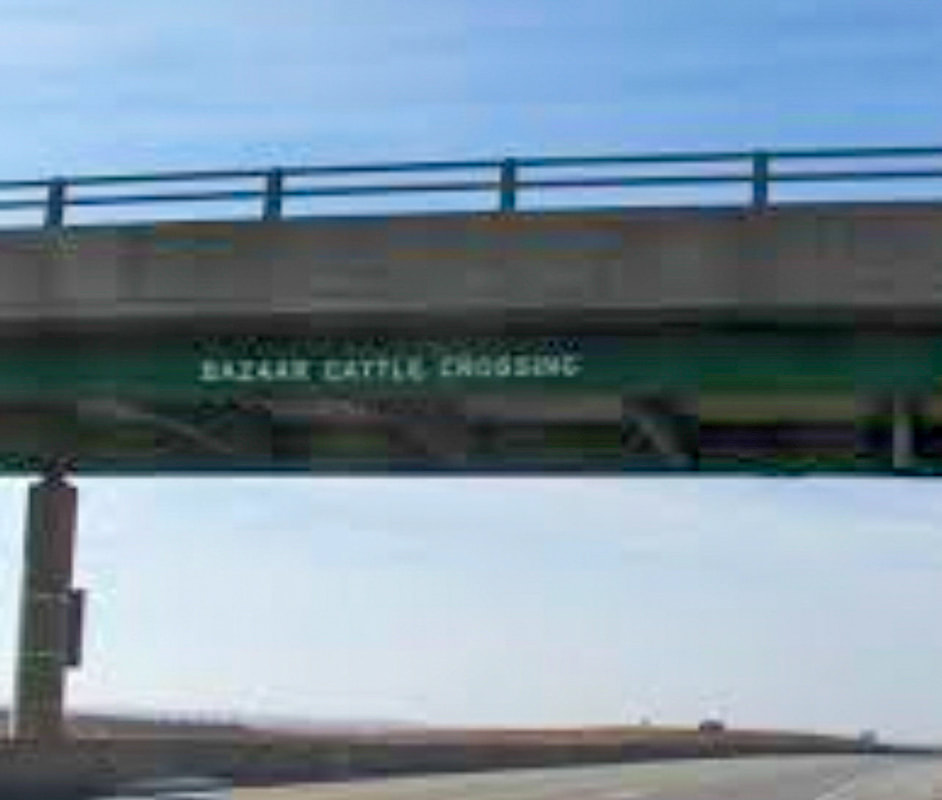 I wanted to share a picture of us traveling with Winchester in the car. However, I’ve since changed cellphones and have lost a few of those photos. Hopefully I’ll be able to recover them one of these days.
The photo below is of our son washing our car. One of these days we’ll have to take Winchester on another road trip in the Corvette.  We can take some new photos then.  Until then… 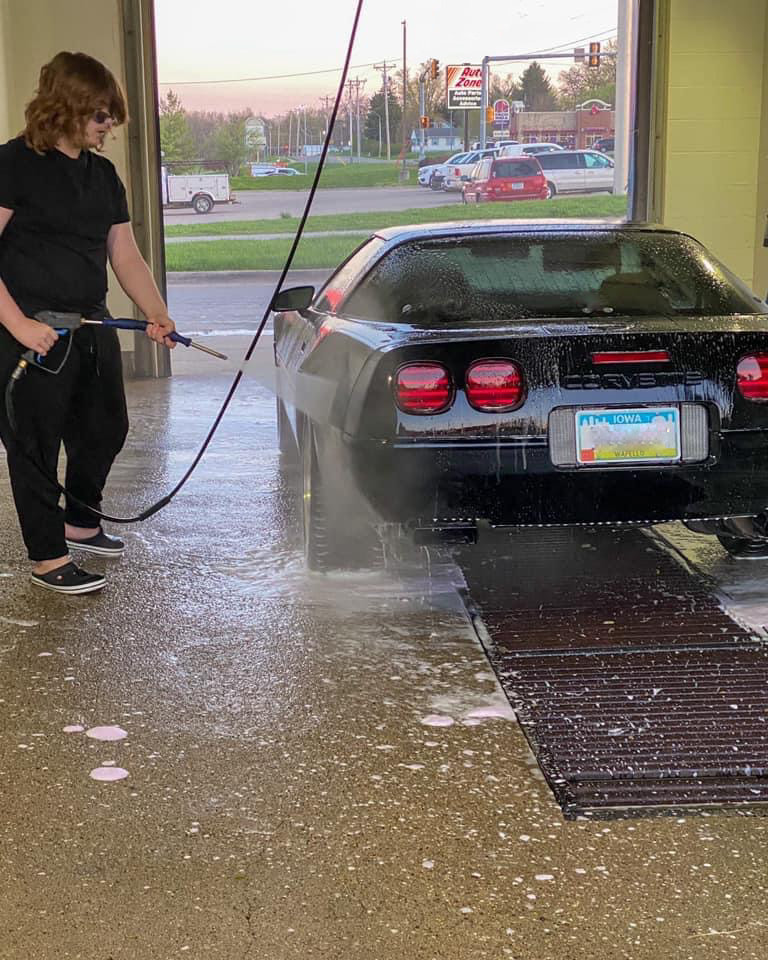